Monty Python: In the Beginning 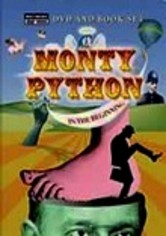 Monty Python: In the Beginning

1969 NR 1h 0m DVD
An in-depth look at Britain's most triumphantly hilarious comedy troupe, this documentary covers Monty Python's early work -- including their legendary comedy sketch show -- as well as their later television series and films. Archive footage provides a front-row seat to some of their classic moments, and a team of critics, journalists and comedians, including Neil Innes, Alexei Sayle, Tom Binns and Ian Stone, add colorful detail to the account.