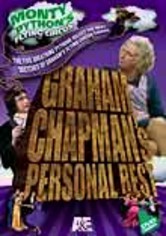 1969 TV-PG 0h 55m DVD
Graham Chapman's Monty Python compatriots -- including John Cleese, Eric Idle, Terry Gilliam, Terry Jones and Michael Palin -- pay homage to the late, great comedian in this retrospective of his best work with the legendary comedy troupe. With characteristic wit and aplomb, they discuss the episodes that showcase Chapman's peculiar -- and singular -- genius. Also included are a Chapman biography and a "megaquiz" sure to please his die-hard fans.