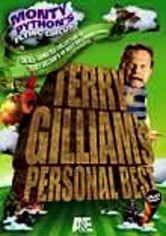 1969 TV-PG 0h 55m DVD
This engrossing PBS special trains its lens on funnyman Terry Gilliam -- the sole American in the brilliant English comedy troupe Monty Python -- as he holds court and shares his best moments from the trailblazing ensemble's TV series. Gilliam, who's now a British citizen, basks in the wonder of it all as he screens his favorite clips. Also included are a Gilliam biography and appearances by other Python geniuses.