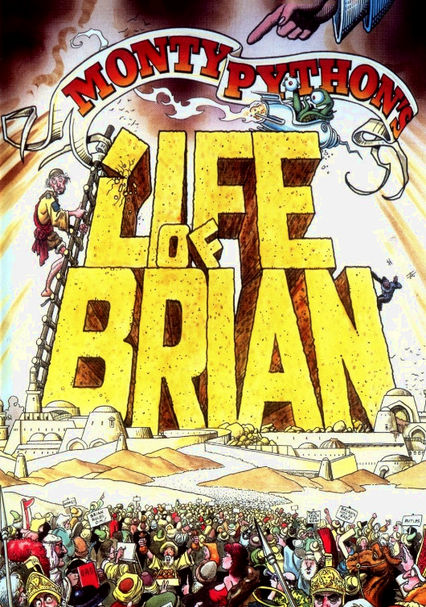 1979 R 1h 34m Blu-ray / DVD
Born on the original Christmas Day in the stable next door to Jesus, Brian (Graham Chapman) grows up to join an anti-Roman separatist group. But as he tries to escape trouble with the law, he finds himself reluctantly thrust into the role of the Messiah. Monty Python legends John Cleese, Terry Gilliam, Eric Idle and Michael Palin co-star in this classic religious satire that pokes fun at fanaticism and hypocrisy.

Parents need to know that this movie, like other Monty Python films, pokes fun at religion, death, politics, and ancient history. Although the film is not about Jesus, it does jokingly convey the life of Jesus' contemporary, a man named Brian. The Monty Python crew lampoons not just religion but also revolutionaries, committee politics, and the Roman hierarchy. There is some violence, but it's cartoonish -- even the sight of dismembered bodies in the Coliseum. And while there are scenes of full-frontal nudity (male and female), it's meant to be humorous not sexual.

Male and female full-frontal nudity that's shown in a humorous, not-sexy manner. Judith and Brian kiss and wake up next to each other, but the nudity comes a bit later. Another man's naked behind is shown, but his front is coverd by his long, long hair.

Brian's mom smacks an unseen baby. The Sermon on the Mount turns into a fist fight. A brawl breaks out at a stoning. Dismembered body parts are strewn around the Coliseum, but they look obviously fake. An imprisoned man is kept in a torture position. Roman centurions beat several people. Criminals are forced to carry crosses. And of course, people are crucified (no blood or nails are visible).

Brian becomes an unwitting martyr for a revolutionary group.

None, except for the popularity of the Monty Python comedians.