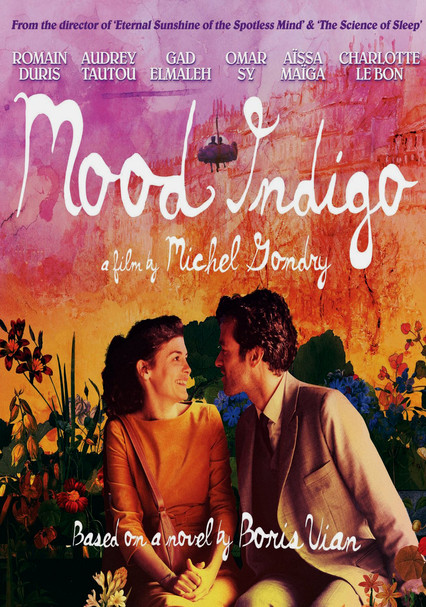 2013 NR 2h 11m Blu-ray / DVD
Based on a novel by Boris Vian, this visually dazzling love story centers on Chloé and Colin, a pair of newlyweds whose marriage is tested when Chloé suffers a mysterious illness that causes a flower to grow in her lung.

Parents need to know that Mood Indigo is a romantic fantasy by acclaimed director Michel Gondry. Iffy moments are few and far between, but there are a few brief strong images, though they occur within an entirely artificial, fanciful world. Characters die, and some brief blood and gore is shown. There's some very brief nudity, both female and male, and sex between a married couple is implied, though they're only shown kissing and embracing. Some other kissing is shown. The 94-minute American version has no foul language in the subtitles, though the uncut French version (which is some 30 minutes longer) may have. Characters drink cocktails and smoke cigarettes from time to time, though mostly socially.

In one scene, two topless women are briefly glimpsed in a car. In another scene, the main character takes off his clothes and holds his hands over his penis, but otherwise, he's clearly naked. Kissing between same-sex and opposite-sex couples. They fall into bed into each other's arms. The wife says "we haven't made love in ages." She uses the word "canoodling" to describe their experience. In one sequence, the wife imagines the husband kissing another woman.

In one sequence, a character helps make weird organic guns. They're long and floppy and fire actual bullets. The character is accidentally shot in the hand, with a blood splatter. Another character is killed with what looks like a drill through the chest. A brief spurt of gore is shown. A third character is killed, and a pool of blood spills out of his head, forming a flower. A main character gets sick and dies.

The movie's main theme is that love is complicated and doesn't necessarily result in a fairy tale ending. Two supporting characters illustrate that partners must compromise, even if the interests of one partner don't cross over into the interests of the other.

The main character has a piano that makes cocktails. He's shown drinking socially a few times, both at home and at a party. He's also shown sipping a drink and weeping when his wife becomes very ill. The wife is shown smoking a cigarette in one shot.