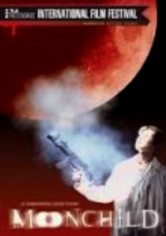 2003 NR 1h 59m DVD
Filmmaker Takahisa Zeze weaves a surreal world of crime and kinship in this futuristic tale charting four decades in the lives of enterprising teen thug Sho (Gackt Camui), his vampire friend (Hyde), their troublemaking buddy, Son (Lee-Hom Wang), and his mute sister (Zeny Kwok). The makeshift group forms a bond, but Sho and Son find themselves on opposite sides years later as members of rival gangs.