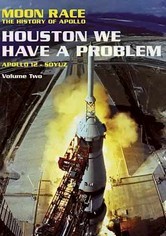 2007 NR 3h 13m DVD
Landing on the moon was only one of the many Apollo missions' accomplishments, and this absorbing documentary follows the historic space program's final phase, including the dramatic rescue of Apollo 13 and the 1975 Apollo-Soyuz hookup. The film features archival footage showing the astronauts on the moon and in orbit as they map the lunar surface and continue to test the capabilities of humans in the heavens.