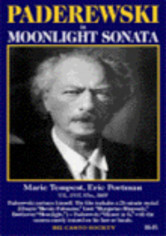 1937 NR 1h 26m DVD
Polish concert pianist Ignace Jan Paderewski plays himself in this romantic drama set in Sweden. Not long after Eric (Charles Farrell) tells Baroness Lindenborg (Marie Tempest) that he loves her, a plane is forced to land nearby, and the Baroness lets the passengers stay at her estate. Suave passenger Mario (Eric Portman) seduces the Baroness, leaving Eric out in the cold. Enter Paderewski, who decides to help Eric win back his one true love.