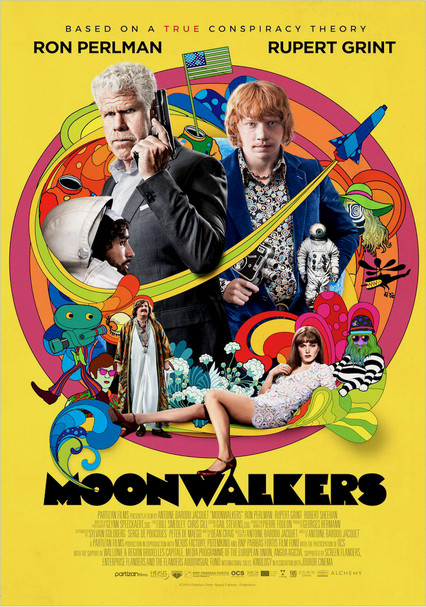 2015 R 1h 37m Blu-ray / DVD
Turning history on its head, this artful drama proposes that the 1960s moon landings were faked, with the help of legendary movie director Stanley Kubrick. To carry off the massive con, a CIA agent must join forces with a struggling rock band.

Parents need to know that Moonwalkers is set in the swinging London arts scene of 1969, and there's lots of drinking, drugs (cocaine, pot, LSD, opium, and more), and nudity (mostly in the form of topless women in the background) as a CIA agent tries to hire legendary director Stanley Kubrick to make a very special movie. There's also quite a lot of graphic violence -- including close-up shots of people getting their heads blown off (or bashed in) -- and near non-stop swearing (mostly "s--t" and "f--k"). Rupert Grint may star, but this is in no way appropriate for Harry Potter fans.

No real sex scenes, but much of the film is set in a large mansion occupied by a group of artists who are quite liberal in their views about nudity -- which means there are often topless women in the background. Kissing.

Lots of graphic violence, including fist fights, shoot outs, execution-style gunshots, and bashing people on the head with sticks, pipes, and shovels. One character is a former soldier who seems to relish taking on multiple opponents. In one scene, he bangs a man's head into the wall until several teeth fall to the ground. Later, he punches a downed rival repeatedly until the attacker's white shirt is sprayed with blood. Other sequences show people's heads getting literally blown off by shotgun blasts.

Loyalty is important, even among thieves, and it's important to keep your word -- especially if there are people who might kill you if you fail to deliver what you've promised.

Tons of drug use: Many scenes show characters snorting cocaine, smoking pot (either rolled into joints or through bongs), and taking opium, LSD, and other substances. Also frequent drinking, including some scenes set at bars that show people getting quite drunk.