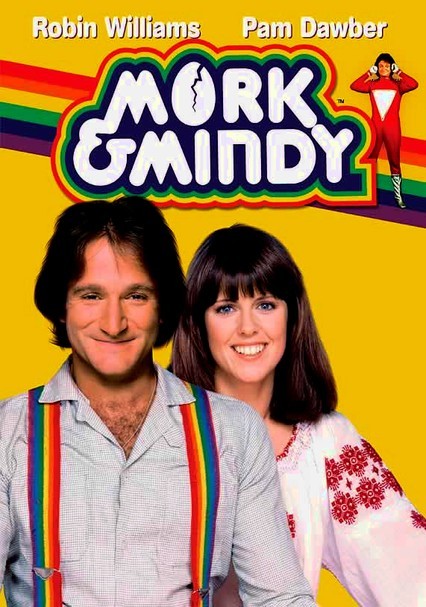 1978 TV-G 2 seasons
In this riotous "Happy Days" spin-off, Robin Williams was transformed from an obscure stand-up comedian to a comic legend with his role of Mork, a quirky alien from the planet Ork who comes to Earth and falls in love with earnest human Mindy (Pam Dawber). Mork's manic attempts to understand humans frequently drive Mindy to distraction, but she does her best to assist his mission, even though her odd new roommate annoys her father (Conrad Janis).

Robin Williams shot to fame as Mork, an alien from planet Ork who's been sent to Earth to do research on humans, in this 1970s sitcom. Mork lives in the attic of friendly Mindy (Pam Dawber), who offers to help him with his mission. In the Golden Globe-winning show's premiere season, Mork falls in love with a mannequin, decides he wants to have a baby, gets drunk on ginger ale and befriends Mindy's high school rival.

A year has passed since Mindy McConnell (Pam Dawber) took in an alien named Mork (Robin Williams), and her once-normal life is anything but. The second season of this pop-culture classic finds Mork transported to another world when he swallows a cold tablet. Later, he makes history by becoming professional football's first male cheerleader ... even though he's technically not human. Guest stars include Raquel Welch and Shelley Fabares.

Parents need to know that Mork & Mindy is a show that appealed to young kids when it aired in the late '70s and early '80s, and it hasn't lost that appeal. However, as on many '70s shows, Mork & Mindy has a relatively high number of sexual jokes and innuendo: The fact that male Mork cohabitates with female Mindy leads many other characters to misunderstand their relationship. That relationship also eventually leads to love and marriage. Parents may also not appreciate the show's constant fat jokes, as Mork takes every opportunity to insult his (apparently large) boss, Orson.

There is relatively frequent sexual innuendo which kids may or may not get; Mork and Mindy live together platonically at first and then fall in love and marry, all the while cohabitating.

Mork is always in danger of being found out as an alien which may stress out very sensitive kids.

Mork's strange habits are often used to point out the unkind and ridiculous ways people do things.