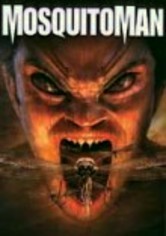 2004 R 1h 30m DVD
Scientists trying to find a cure for a rogue strain of West Nile virus create a bloodthirsty half-man half-mosquito in this horror tale. The scientists test their antidotes on a death row inmate who gets exposed to a radioactive goo, turns into a giant "mansquito" and escapes from the lab to quench his thirst. Meanwhile, a sexy scientist also exposed to the experimental serum hopes to stop the mutant skeeter. Corin Nemec and Musetta Vander star.