Mother of the Bride 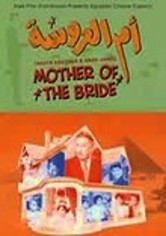 Mother of the Bride

1963 NR 1h 42m DVD
Already overwhelmed by the demands of their seven unruly children, Zeinab and Hussein (played by Egyptian film legends Tahiya Karioka and Emad Hamdi) face a new challenge when their oldest daughter gets engaged. As the groom's family makes increasingly extravagant requests, the bride's harried parents -- determined to fund a wedding that will make their daughter proud -- find themselves considering some rather wacky moneymaking schemes.