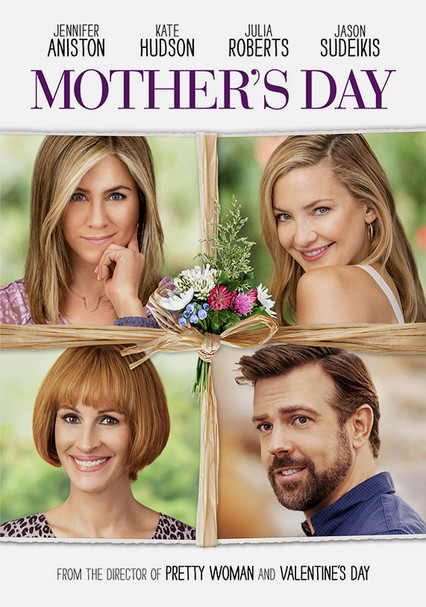 2016 PG-13 1h 58m Blu-ray / DVD
Offering an ensemble tribute to mothers everywhere, this star-studded comedy focuses on an assortment of moms and their intertwining lives as their annual day of recognition approaches.

Parents need to know that Mother's Day is the third holiday-based movie from director Garry Marshall. With an all-star cast led by Julia Roberts, Jennifer Aniston, and Kate Hudson, the comedy follows several interconnected characters as they deal with motherhood issues. There's infrequent strong language ("s--t," "a--hole," one "f--king") and some racial stereotypes/insensitive comments about Indian characters (like "towelhead" and "darker than a Frapuccino"). There are a few marital kisses and a scantily clad character but no sex scenes, and overall the movie, which promotes strong bonds between mothers and their children, is intended to be a celebration of motherhood.

Married couples kiss; a woman wears revealing clothes. Innuendo. Jokes about how long it's been since there has been any action. A couple of comments about women's bodies.

A father falls and breaks his leg; a boy has a scary panic attack.

A few uses of "s--t," "damn," and "a--hole," plus one "f--k." A white couple uses the racial slur "towelhead" and jokes about how dark a half-white, half-Indian child's skin is; their daughter mentions she wasn't allowed to date anyone whose skin was "darker than a Frapuccino."

Clear, obvious messages about the power of a mother's love -- and how important that role is in your life, whether you're a child or an adult.