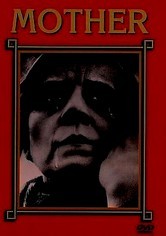 1926 NR 1h 24m DVD
Niovna (Vera Baranovskaya), a mother caught up in the failed 1905 Russian revolt, finds her son (Nikolai Batalov) and husband (Aleksandr Chistyakov) on opposite sides of a worker's strike. At first she's naïve to the cause, but Niovna soon discovers the Czarist government's injustices and makes a valiant stand for her people. Director Vsevolod Pudovkin's haunting silent film is based on a story by Maxim Gorky