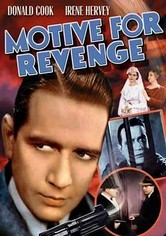 1935 NR 1h 0m DVD
Barry (Donald Cook) aims to give his wife, Muriel (Irene Hervey), a better life in this 1935 drama, but he gets caught in an embezzlement scheme that lands him in jail. Though she promised loyalty, Muriel quickly files for divorce -- but he doesn't feel it's over. Upon release, Barry vows to find Muriel and her rich new husband. So when the groom winds up dead, the cops peg Barry for the crime. Can he find the real killer to save himself?