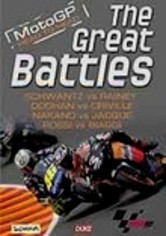 2006 NR 1h 2m DVD
It's an intense series of two-wheeled road battles as four pairs of Grand Prix Motocross World Champions play track warriors in head-to-head MotoGP action. Watch an onslaught of wheelies, twitches and powerslides as these friendly rivals push their machines to the 200 mph limit. Race fans will thrill to watch these MotoGP superstar matches: Schwantz vs. Rainey; Doohan vs. Criville; Jacque vs. Nakano; and Rossi vs. Biaggi.