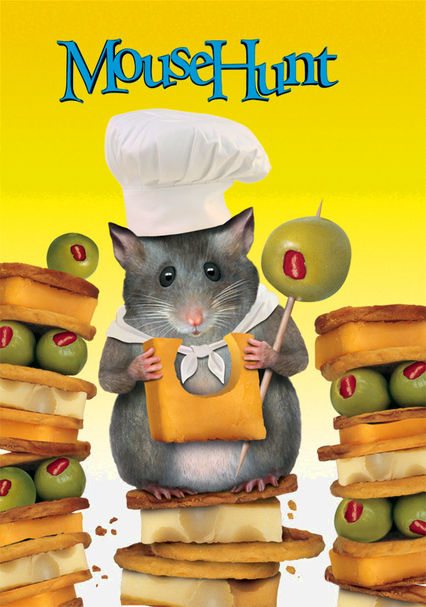 1997 PG 1h 38m DVD
Two down-on-their-luck brothers inherit a run-down mansion that turns out to be worth millions. They can sell it and pocket a fortune, but first they have to evict its diminutive tenant: a mouse with no intention of leaving.

Parents need to know that Mouse Hunt is a 1997 movie filled with unrelenting comedic pratfall-style violence. The two lead characters use a variety of implements to try to kill a mouse, including a shotgun and a nail gun. The mouse fills the house with gas later and blows the brothers sky-high. In the opening scene, the two brothers drop their father's coffin at the top of the church stairs, resulting in the corpse flying out of the coffin and into a manhole. There are some moments of inappropriate humor: The two lead characters are covered in excrement after accidentally destroying the sewer line with a vacuum, and the exterminator they hire ends up flat on his back with the mouse defecating on his mouth. This same exterminator eats a piece of mouse excrement to determine its diet. Early in the film, the mayor vomits a cockroach while eating in a fancy restaurant. There also are some moments of subtle and not-so-subtle sexual innuendo: A character talks of "making love like in nature films," the greedy wife of one of the lead characters appears in his office in lingerie, and the pursuit of the mouse leads to the two lead characters sticking their hands down the dresses of two women, and, later, unzipping the fly of one of the characters as he screams "Get it out!" There's also occasional profanity ("hell," "son of a bitch," "bastard").

A man's clothes unravel in a pratfallish "accident" in a factory; when he runs into his office with giant balls of string covering his private parts, he finds his wife on the desk wearing lingerie. When a mouse falls into a woman's cleavage, a man tries to catch the mouse by sticking his hand down the front of her dress; her female friend has a man stick his hand down her dress to copy her.

"Bastard," "hell," "son of a bitch." Some sexual innuendo: talk of "making love like in nature films," a vicious cat described as "one mean pussy," and, when a mouse crawls into the crotch region of a character's pants, he screams "Get it out!" repeatedly as his brother is unzipping his fly.

In the midst of all the slapstick and pratfalls, characters learn the importance of family.

At a party, a bottle of Seagram's gin is in plain view.

Characters drink alcohol at a reception.