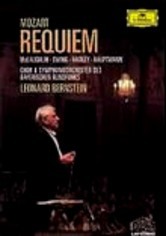 2006 NR 0h 45m DVD
Leonard Bernstein conducts the Chor and Symphonieorchester des Bayerischen Rundfunks in this 1988 performance of Mozart's final, unfinished masterpiece, filmed live at the splendid baroque Abbey Church in Diessen, Bavaria. Begun in 1791, the piece was finished by one of the composer's students after his death. Singers include soprano Marie McLaughlin, mezzo-soprano Maria Ewing, tenor Jerry Hadley and bass Cornelius Hauptmann.