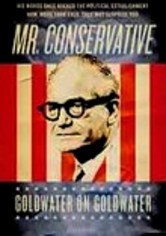 2006 NR 1h 30m DVD
The life and career of conservative icon Barry Goldwater is recounted from his days as an Arizona businessman to his five-term Senate career and his ill-fated run for president in 1964. Produced by the politician's granddaughter C.C. Goldwater, this profile features interviews with a host of media and political luminaries, including Hillary Rodham Clinton, Edward Kennedy, John McCain, Al Franken, Robert MacNeil, Ben Bradlee and others.