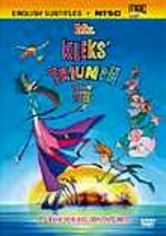 2001 NR 1h 15m DVD
Directed by Krzysztof Gradowski, this fantasy based on a classic Polish fairy tale by Jan Brzechwa revolves around Tom, a young illustrator who's down in the dumps because he's about to lose his job at &NFiThe Fantasy World&NFi_; magazine. But everything changes one day while Tom is alone in his studio, as his drawings magically come to life and he's pulled into a fantasy world filled with quirky characters and wondrous adventures.