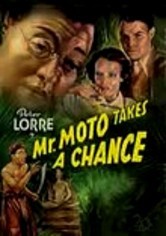 1938 NR 1h 3m DVD
The fourth installment of the Mr. Moto series finds the well-mannered Japanese sleuth (Peter Lorre) in a remote area of Indochina, where he's able to rescue a pretty young pilot (Rochelle Hudson) from the clutches of a ruthless despot (J. Edward Bromberg). As luck would have it, a pair of American newsreel cameramen (Robert Kent and Chick Chandler) captures the whole thing on film -- but they unwittingly get pulled into the story.