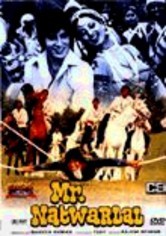 1978 NR 2h 35m DVD
As a child, Natwar (Amitabh Bachchan) sees his policeman brother kicked off the force after being framed by Vikram (Amjad Khan), a ruthless smuggler. Rakesh Kumar's romantic action-comedy chronicles Natwar's quest for revenge as he leads a double life as the titular underworld kingpin. Since he gives his ill-gotten gains to the poor, however, Natwar's popularity grows, and he soon starts beating Vikram at his own game.