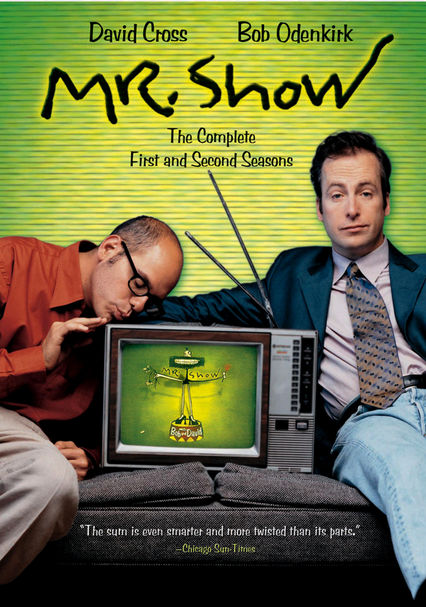 1995 TV-MA
This late-night HBO sketch comedy series starring funnymen Bob Odenkirk and David Cross is a breath of fresh air for those seeking big laughs, terrific ingenuity and a touch of good-natured insanity. The first season of this laugh-a-minute program is full of quirks and oddities -- such as the sketch with the hunger striker who wanted to be buried up to his neck in mashed potatoes -- and is utterly unique.

Parents need to know that this cable sketch comedy show includes uncensored profanity, some sexual elements, and mock violence (though the language has been bleeped/cleaned up for syndicated airings). Some skits show couples in bed and brief shots of women in their underwear, and jokes cover everything from hiring prostitutes to "frigid" women and hitting on women in bars -- but they mainly poke fun at the male characters, and the jokes aren't at the expense of the women. Mock-violent scenes include a riot at a protest where a police officer is hit on the head and pulls his gun and points it at attackers. In another skit, a news reporter acts as a sniper and shoots at people from a rooftop.

Scenes of men and women in bed allude to sex but aren't directly sexual. Brief shots of women in underwear (also generally not sexual). Jokes involving prostitution, the idea of "frigidity," etc.

Mock comic violence, like a news reporter shooting another for a scoop. No blood.

Targets are generally mainstream folks. No jokes about people of color, etc.

Occasional jokes with drug or alcohol references, such as mention of a secret room for bongs.