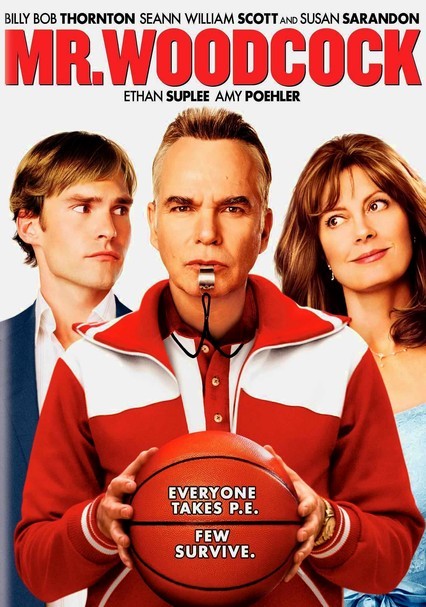 2007 PG-13 1h 27m Blu-ray / DVD
When self-help author John returns to his childhood home, he learns his mother has fallen for his sadistic high school gym teacher, Mr. Woodcock. With the couple's nuptials looming, John does everything he can to make sure his mom says "I don't."

Parents need to know that this lowbrow Billy Bob Thornton comedy revolves around an ongoing, immature competition between a woman's adult son and her suitor. In other words, expect lots of slapstick violence and childish behavior. Sexual jokes include the older man bragging about his prowess and sleeping with the young man's mother (in one scene, the younger man hides underneath a bed while his mother and her boyfriend have noisy sex above him). There's some drinking and smoking and plenty of strong language, including "a--hole," "s--t," and derogatory terms describing women and homosexual men.

Especially obnoxious sexual innuendo for a movie targeted at older tweens and teens: John hides under Woodcock's bed, and then Woodcock and John's mother enter and have noisy sex, with the son beneath and the mattress sagging onto his face. Other visuals include Woodcock making a boy strip to his underpants. John tells his mother that Woodcock "touched me," then says it's not true. John listens to his mother and Woodcock having sex in the next room (moans). A woman says she's a sex addict. And then there's the fact that Woodcock's very name is an innuendo.

Mostly abusive slapstick, with Woodcock slamming boys with basketballs and taking a bat to their crotches as an "equipment check." Woodcock beats John with a bat. John falls off a treadmill into a stack of weights and gets a bloody cheek. Nedderman throws a chair at his brother and gives him a black eye. Woodcock and John wrestle, with lots of body slamming and yelling and one hit with a chair.

Language includes occasional uses of "son of a bitch," "s--t," "a--hole," jackass," "ass," "hell," and "damn." One using of "f-ing" (without the middle part of "f--k"). Lots of obnoxious and deprecating words and phrases, including "fat gelatinous little kids," "little porker," "hicks," and "retard." Some derogatory comments about women and homosexual men as well.

A woman's son and fiancé fight constantly, their one-upsmanship mostly icky and childish. Even when they make up, they're competing.

Journey T-shirt, mentions of Oprah and Judge Joe Brown. Tyra Banks appears as herself on her TV show.

John and Maggie drink in bar; she also smokes cigarettes in a few scenes. On a plane, Maggie tells the stewardess that she wants a regular-sized bottle, as "I'm an alcoholic, not a Barbie doll." Woodcock drinks beer a few times. Woodcock's ex-wife drinks liquor and smokes cigarettes.