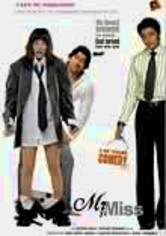 2005 NR 2h 17m DVD
Advertising executive Sanjay (Aftab Shivdasani) reaps the consequences of his womanizing when one of his many girlfriends finds out he's cheating and kills him in a fit of rage. But the gods give him another chance by reincarnating him as Sanjana (Antara Mali), Sanjay's long-lost sister! In his new feminine form, he finally understands what it's like to be a woman -- and what dogs men can be -- in this gender-bending Bollywood comedy.