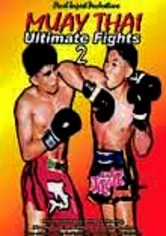 2005 NR 1h 35m DVD
In Muay Thai competition -- a hand-to-hand combat style developed in Thailand's royal courts -- fighters are allowed to punch, knee, kick and elbow each other in the head and face, which means that almost anything goes! This high-octane installment in the Ultimate Fights series delivers seven of the most vicious battles ever caught on camera between 14 talented warriors, resulting in three memorable knockouts.