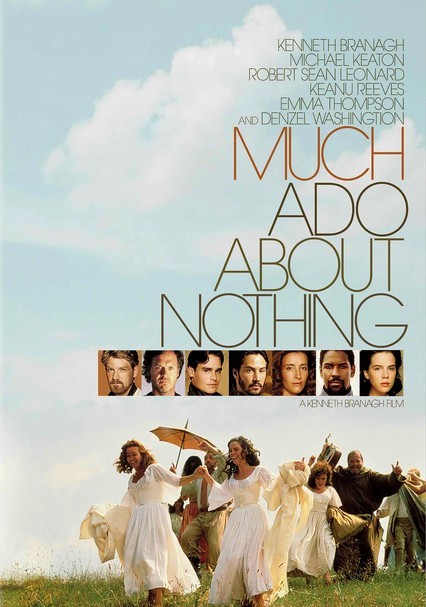 1993 PG-13 1h 51m DVD
Benedick and Beatrice are two marriage-phobic rivals in Florence, Italy, in this Shakespeare comedy whose lively plot involves complications, pranks and peerless wordplay. Hero and Claudio try to hook up the two B's despite tenacious resistance.

Parents need to know that this very accessible Shakespeare adaptation gets the PG-13 rating because of a bunch of visible backsides in a jubilant bathing scene and a brief sex scene visible from afar (you'll see a few thrusts but characters are clothed). The rest of the content is pretty mild: a couple bad guys get drunk, a death is faked, and a silly guard shouts "I am an ass!" and thinks it's a compliment.

Characters are clearly having sex near an open window, as seen from a courtyard; skin isn't shown, but a few thrusts are apparent. A few minutes into the film the large Italian baths are alive with activity; plenty of bare bottoms (male and female in separate baths) are visible amidst the undressing, playful splashing, and dressing. Characters shout accusations and call Hero "wanton" and that she "knows the heat of a luxurious bed." Some clothed fondling of breasts and slapping of backsides at a masked party.

The fair lady faints after accusations of infidelity, and her betrothed is told she died of grief. Hero's father pulls her hair and slaps her in a rage and Claudio pushes her. Prisoners look ill-treated by incompetent guardsman.

"Bastard." Then "ass" is shouted multiple times by a foolish guard who thinks it's a compliment.

The movie starts with a poem about not taking things too seriously ("sigh not so ... and sing hey nonny nonny"), so there aren't any heavy messages to glean. Perhaps: keep a wary eye out for vengeful family members, and rumors are powerful things.

It's set in a vineyard, so wine is a part of all the celebrations. Two characters get stumbling drunk.