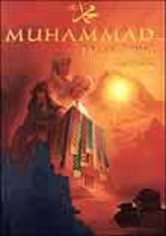 2001 NR 1h 35m DVD
A father tells the story of Muhammad to his little girl in this animated family film. The film chronicles Muhammad's life story, beginning with his retreat from Mecca's decadent streets to a cave where he prays and is visited by the archangel Gabriel. Told by Gabriel that he's a prophet meant to preach charity and the religion of Abraham, Muhammad returns to Mecca and quietly gathers followers, but Quarysh leads an army against the man of peace.