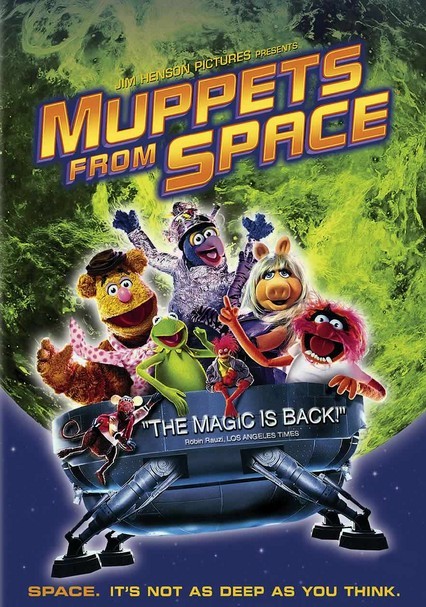 1999 G 1h 27m Blu-ray / DVD
When Gonzo's breakfast cereal tells him that he's the descendant of aliens from another planet, his attempts at extraterrestrial communication get him kidnapped by a secret government agency, prompting the Muppets to spring into action.

Parents need to know that Muppets from Space is classic Muppet fare with jokes to keep the parents happy and a fun story for kids, with the valuable theme of an outcast trying to find his place in the world. There are some mildly suspenseful moments and lots of comic action sequences in which some of the beloved Muppet creatures, particularly Gonzo, are in danger -- lightning hits, a kidnapping, pratfalls, a Miss Piggy "punch-out" -- all exaggerated and meant to be funny rather than scary.

Frequent cartoon action and peril. At the center of the story, Gonzo is electrified, kidnapped, squashed into a tube, threatened with brain surgery, and shot out of a cannon. An oven explodes; characters fall, catch on fire, and are subject to lab experiments. There's some spooky music, a blinding rainstorm, and several instances of comic hand-to-hand combat. The outrageous villain threatens the Muppets with a futuristic gun.

Muppets from Space stresses that individualism is a plus. It's far better to respect differences (someone might be described as "distinctive" or "unique") rather than to ridicule them with words like "freaky" or "weird." Teamwork plays an important part in the story.