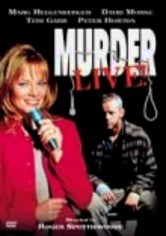 1997 NR 1h 32m DVD
Consumed with grief and enraged by his daughter's suicide -- which was caused by an inflammatory television talk show segment -- a father (David Morse) takes the show's egomaniacal host (Marge Helgenberger) hostage. The show's crew and audience remain frozen with the threat of a bomb, and the clock (to say nothing of the bomb's timer) is ticking. Teri Garr and Peter Horton co-star in this taut thriller directed by Roger Spottiswoode.