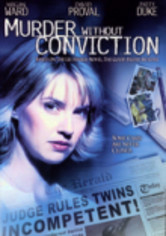 2004 NR 1h 27m DVD
This engrossing made-for-TV mystery follows ex-nun Christine Bennett (Megan Ward), who becomes enmeshed in a 30-year-old murder case. Suspected of matricide, savant twins James and Edward Talley (David Proval, in a dual role) have spent three decades confined in institutions despite never being charged with the crime. Can Christine -- with help from gumshoe Jack Brooks (Morgan Weisser) -- unlock the secret that will exonerate the Talley brothers?