Murder in the Heartland: The Search for Video X 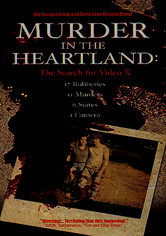 Murder in the Heartland: The Search for Video X

2003 NR 1h 29m DVD
This meditation on America's insatiable appetite for sensational entertainment was made long before reality TV became its own genre. Shot in faux documentary style, Murder in the Heartland focuses on that very fascination -- albeit a more dark and ominous kind. Two criminals on the run have filmed their acts of murder and mayhem, and a film crew is trying to find their "Video X."