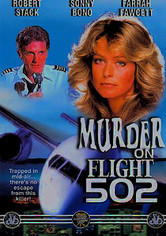 1975 NR 1h 39m DVD
The passengers on a trans-Atlantic 747 find themselves flying into a nightmare when a seemingly mad killer starts taking them out one by one. The pilot (Robert Stack) teams with some courageous passengers in an effort to stop him before they're all dead. Meanwhile, authorities on the ground race to find clues to the murderer's motives. Farrah Fawcett, Walter Pidgeon, Ralph Bellamy, Danny Bonaduce and Fernando Lamas star in this tense thriller.