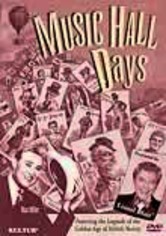 2004 NR 1h 15m DVD
Lionel Blair serves as a guide as he presents the biggest names of the Music Hall era, from Bartholomew Fayres to the Vauxhall Pleasure Gardens of the 19th century. The passage begins with records featuring popular artists of the time period, including Marie Lloyd and Dan Leno, Arthur Askey, George Formby, Gracie Fields and more. Also featured is footage of artists such as George Leybourne, Charles Coburn and Gus Elen with Lilly Morris.