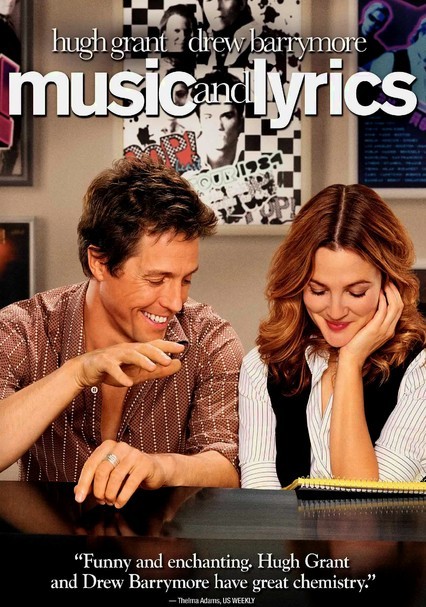 2007 PG-13 1h 44m Blu-ray / DVD
A has-been pop star gets the comeback chance of a lifetime when a teen singing sensation asks him to write and record a duet with her. But he can't write lyrics to save his life, so he enlists help from a quirky woman who has a way with words.

Parents need to know that teen girls will be interested in seeing this cute Drew Barrymore vehicle. The good news is that you can probably let them: Overall, it offers very little to be concerned about. Alex and Sophie sleep together, but nothing salacious is shown on screen (they kiss a few times, but nothing graphic), and Alex gets into a fight with Sophie's ex. The language is mild, and there's not much drinking. The movie revolves around the question of whether it's better to do what others want or to stand up for what you believe in, which is a good one for teens to think about.

Cora dances sexily in clothes that expose part of her butt and mimics sex sounds at the beginning of a song. She also appears on stage in a tiny bathing suit. Alex and Sophie have sex (off-screen -- they only kiss on screen). Sophie walks around in a sheet.

Alex, defending Sophie, gets into a shoving match with Sloan, who twists his arm backward and threatens to break it. He leaves with a bruised cheek.

Cora's music and image are described as "Buddhism in a thong," representing so many hyper-sexualized pop princesses; Sophie can't stand up for herself against Sloan, and Alex gives up to easily, but the overall message is to be true to yourself.

Alex talks about having done drugs, and Sophie and Alex drink wine and then champagne in different situations -- but they don't drink to excess.