Music for Airports: In the Ocean 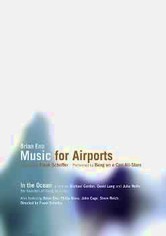 Music for Airports: In the Ocean

1999 NR 1h 47m DVD
In this unique documentary, Dutch filmmaker Frank Scheffer trains his lens on the groundbreaking music group Bang on a Can, capturing the band's performance of Brian Eno's ethereal composition "Music for Airports" at the 1999 Holland Festival. The film not only highlights the work of Eno, a distinguished ambient music composer, but also charts the cross-pollination of musical ideas between Europe and America in the 21st century.