Music for the Movies: Georges Delerue 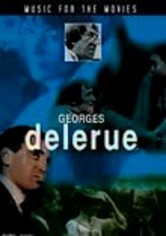 Music for the Movies: Georges Delerue

2007 NR 0h 59m DVD
Although composer Georges Delerue provided music for some of the most striking French new wave pictures, he became a sought-after figure in Hollywood as well. Hear his story and his music in this exciting documentary from Jean-Louis Comolli. The film covers Delerue's collaborations with cinematic giants Francois Truffaut (Jules and Jim, Day for Night), Ken Russell (Women in Love) and Oliver Stone (Salvador and Platoon).