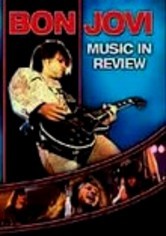 2007 NR 1h 0m DVD
Formed in the 1980s, rock band Bon Jovi has continued to churn out hits into the 21st century -- a legacy that's explored in this critical perspective of the New Jersey group's career to date. Jon Bon Jovi, Richie Sambora and the rest of the boys strut their stuff in live performance clips of hits such as "Wanted Dead or Alive," while rock critics, colleagues and friends provide insight into the music.