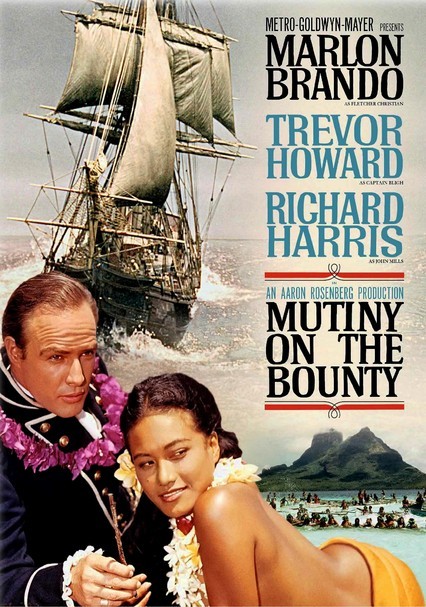 Parents need to know that this is the 1962 version of Mutiny on the Bounty, where Marlon Brando portrays Fletcher Christian, the reluctant and ambivalent leader of the mutineers. There are some violent scenes -- sailors are flogged, chained, and keel-hauled. There is also some tame sexual innuendo as the sailors learn of the Tahitian island women's attitudes towards lovemaking. At nearly three hours, the length might stretch the patience and attention spans of younger viewers, but then again, this is a glorious version of this immortal story with actors at the peak of their craft, and the excitement and drama in each scene only lets up during the intermission.

Some sexual innuendo when the sailors meet the Tahitian natives. Scantily clad island women greet the sailors upon their arrival in Tahiti. When it is learned that Tahitian cultural tradition dictates that it is rude to turn down sex, Fletcher Christian is ordered by Captain Bligh to make love to the island king's daughter, who is attracted to him.

A sailor is whipped 24 times for insubordination. When his punishment is finished, his back is covered in whip marks and blood. A man is crushed by a giant barrel filled with water. A sailor suffering from a fever falls to his death. A sailor is "keel-hauled" for attacking Captain Bligh; the sailor is tied up with rope and tossed overboard, where he is eaten by sharks.

"Hell." "Damn." Captain Bligh refers to a Tahitian woman as a "slut," when one of the sailors on the Bounty approaches him about wanting to marry her.

While certainly a classic film, there isn't much in the way of positive messages.

Sailors smoke from pipes and drink wine and rum.