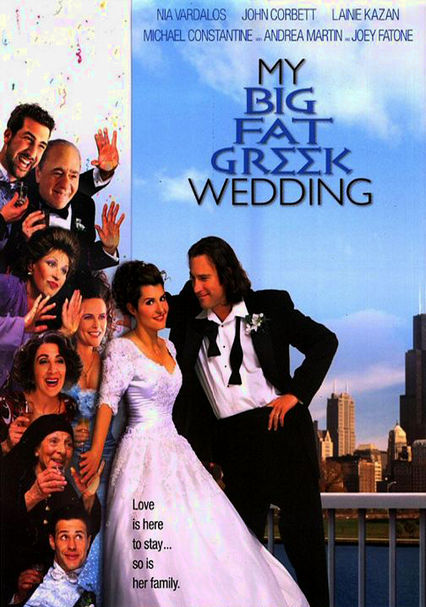 2002 PG 1h 35m DVD
In this romantic comedy, a single Greek woman falls in love with a non-Greek man, which is a problem for members of her strict family -- particularly her traditional father, whose Greek pride knows no bounds.

Parents need to know that My Big Fat Greek Wedding is a crowd-pleasing culture-clash romantic comedy. There's a non-graphic sexual situation, but it's clear that Toula and Ian wait until they're really committed before sleeping together. Characters drink beer and wine, and while at a party, Ian's parents are introduced to ouzo and overindulge. Occasional profanity includes "ass," "jagoff," and "bite me," and Toula's brother teaches Ian Greek phrases such as "I have three testicles" and "nice boobs," which he tells him mean something innocuous. Positive messages include the importance of family and finding a balance between independence and remaining connected to your roots.

Lots of kissing and one mild sex scene; no nudity. Some innuendo/discussion among family members of "making babies."

Comedic pratfall -- a flirting man who isn't paying attention to where he's going walks into an elderly woman, falls to the ground, and is struck on the face repeatedly with a handbag.

"Ass," "jagoff," "bite me." The bride-to-be's Greek brother has her non-Greek groom-to-be say phrases in Greek that actually mean "I have three testicles" and "nice boobs." A 6-year-old girl asks another 6-year-old girl if the food she's eating at lunch is "moose caca."

The importance of family and a connection to traditions. Finding a balance between independence and remaining connected to your roots.

Drinking at parties, dinner. Characters drink ouzo at two festive events; a couple gets drunk, and the room is shown spinning from their point of view.