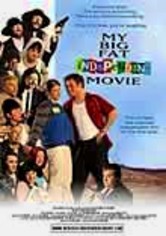 2005 R 1h 20m DVD
In this parody of the independent film genre, Johnny Vince (Darren Keefe) is a hip cat who plays trombone in a swing band. Two bumbling criminals, Sam (Neil Barton) and Harvey (Eric Hoffman), mistake Johnny for a member of a crime trio put together by their mob boss in order to pull off a robbery in Las Vegas. On their way to Sin City, they take a gorgeous woman hostage, but have no idea that she's about to change their lives.