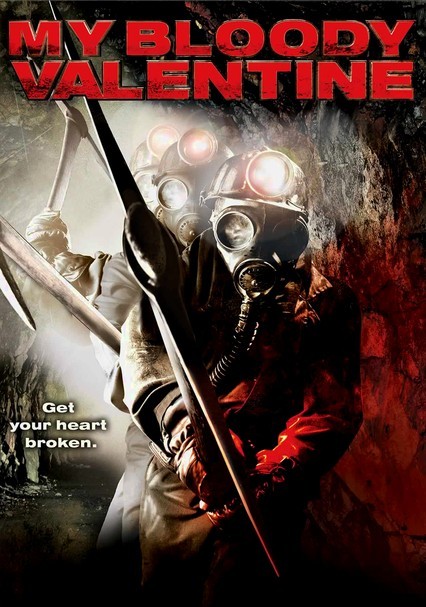 2009 R 1h 41m Blu-ray / DVD
Haunted by the mining-related massacre that took place there on Valentine's Day a decade ago, Tom returns to his hometown to find some closure. But no sooner does he arrive than a pickax-wielding madman begins a new bloody killing spree.

Parents need to know that this ultra-gory slasher/horror remake is full of foulmouthed, unsavory characters, many of whom end up getting speared by pickaxe blades, shot, dismembered, and/or eviscerated. Human hearts are torn out and put inside chocolate boxes. There's extensive nudity in a sex scene that eventually becomes a nude chase-murder scene. Teenagers drink with abandon, police officers are unethical, husbands are unfaithful, and boyfriends are menacing. Strong language flows freely, from "damn" to "f--k" and everything in between.

Characters make a "sex tape" together in a softcore scene that features both male (from the rear) and female (from about every angle there is) nudity. An extended chase scene shows the same actress fully naked. Dialogue includes references to "hand jobs," marital infidelity, and out-of-wedlock pregnancy.

Bloody dismembered bodies, characters speared with pickaxes through the skull and torso. One such impaling makes a bloody eyeball pop out of the face. Another rips off a man's jaw and throws it across the film frame. A girl's head is split in two by a shovel. Characters are shot at close range. Visuals of ripped-out human hearts, as well as the gaping chest cavities.

Some product names in the background of a grocery store, barely distinct.

Cigarette smoking, some drinking (including underaged). One character is obviously drunk. A main character takes some sort of prescription medication for mental illness.