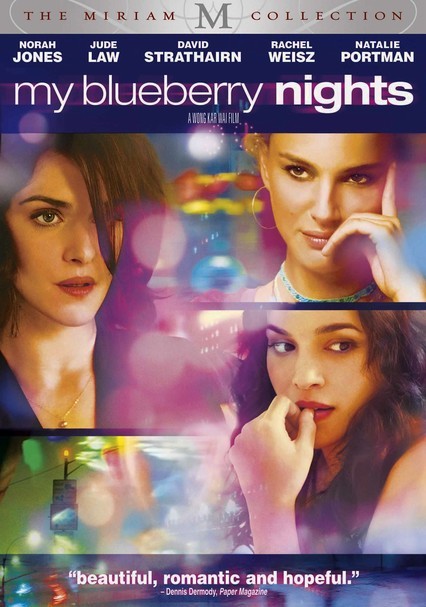 2007 PG-13 1h 34m DVD
After getting dumped by her two-timing boyfriend, a brokenhearted New Yorker impulsively leaves the city behind to embark on a cross-country odyssey, during which she encounters an assortment of other lost souls.

Parents need to know that this romantic drama, while generally dreamy in tone, takes on some heavy subjects, including adultery, betrayal, and death. Characters also swear ("f--k" pops up infrequently), smoke, drink heavily, and gamble. In one scene, a man points a gun at a woman he claims to love more than anything in the world (except for, perhaps, liquor). A drunk driver is shown slumped over the wheel after a fatal car accident. A kiss that's supposed to be tender feels a little invasive, too.

A man kisses a woman while she's sleeping; a wife flaunts her boyfriend in front of her estranged husband; some cleavage shots and innuendo.

A drunk driver is shown slumped over the wheel after a fatal car accident. Bitter, searing fights -- some public, some private -- between a husband and his estranged wife. In one instance, the husband threatens her with his gun; in another, he beats her current boyfriend so badly that he needs an ambulance (not much of the actual confrontation is shown).

A young woman who feels disconnected from her present reality goes on a road trip to find herself. She's gentle and kind but unsure of who she is; eventually, in helping others figure things out, she does, too. A moment in which a man kisses a woman while she's asleep is played for romance but comes off slightly creepy (and silly). Total dysfunction between an alcoholic man and his estranged wife, who also likes drinking. Another young woman has a dysfunctional relationship with her father, who may have inadvertently helped her develop a gambling problem. She bends the truth when it suits her agenda.

A casino/hotel name is flashed in a few scenes, highway signs, FedEx, Chrysler.

One man is clearly struggling with sobriety (he tries but continually fails), and his estranged wife is also a big drinker. One whole segment of the movie takes place largely in a bar, where Elizabeth works. Jeremy is a major smoker, and a lot of his conversations with Elizabeth (and others) take place while he's smoking out front.