My Chemical Romance: Things That Make You Go mmmm! 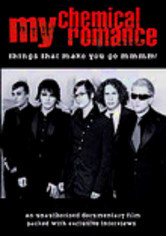 My Chemical Romance: Things That Make You Go mmmm!

2006 NR 1h 1m DVD
Filmed in their native New Jersey, this full-length documentary recounts My Chemical Romance's rise through the pop-punk ranks, visiting all of the group's hometown haunts and early performance venues. Interviews with the band members shed light on their history and music, and chats with those who know them best -- including their producer, former bandmates and their record label's president -- provide added insight.