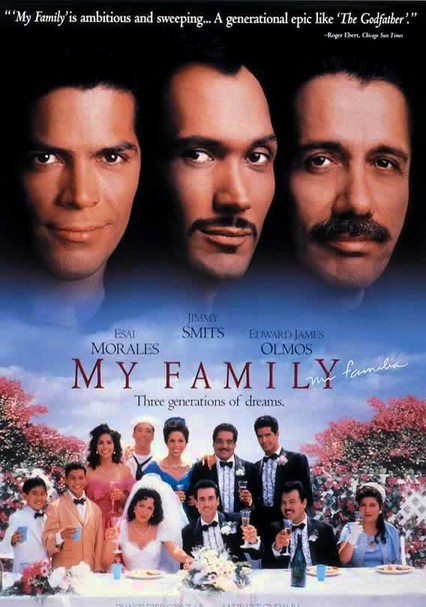 1995 R 2h 6m DVD
Francis Ford Coppola produced this sprawling immigrant saga that tells the stories of three generations of the Sanchez family as they migrate to California during the 1920s, weather the Depression and World War II, and look to the future.

Parents need to know that this movie about a hardworking and loving Mexican-American family has a lot of adult material. Characters are partially nude in passionate love scenes, and there are several violent moments including a bloody shooting, a knife fight that ends in a fatality, and a graphic childbirth scene that ends in a mother's death, her body shown briefly in the morgue. There's a lot of cursing in both English and Spanish; one character drinks and another sells marijuana.

A husband and wife kiss passionately; they are then shown naked in bed; the wife's breast is briefly visible. A man and a woman make love in a field. They are clearly naked, although positioned strategically and shot from the waist up so that nothing is revealed.

A character, on the run from police, is killed when officers shoot him in the head and the back. Two characters engage in a knife fight: one is fatally stabbed. Both of these scenes are fairly graphic and bloody. A woman threatens a man with a shotgun. Police strike a man with a nightstick. A few fights occur throughout the film. A graphic childbirth scene ends in a mother's death, her body shown briefly in the morgue. A mother makes a perilous journey across a river with her baby.

Characters curse frequently in both languages, with the worst being "f--k you" in English and "f--k your mother" in Spanish.

Overall, a story of a hardworking, loving, and idealistic family. There are scenes of ethnic discrimination, as when authorities round up Mexicans (regardless of their citizenship), force them into trucks, and deport them as part of a Depression-era immigration sweep, or when a woman comments that Latina maids are "always getting pregnant."

A character admits that he sells marijuana. A character drinks an alcoholic beverage. Cigarette smoking shown.