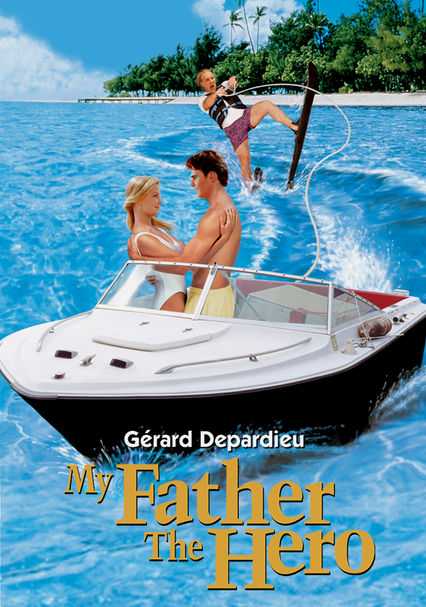 1994 PG 1h 30m DVD
When Frenchman Andre (Gérard Depardieu) takes his 14-year-old daughter Nicole (Katherine Heigl) on a Caribbean vacation, she develops a crush on hunky Ben (Dalton James). To impress Ben, Nicole pretends Andre is her lover -- which has the rest of the resort crowd loathing his cradle-snatching ways. But when the police threaten to arrest Andre for consorting with a minor, Nicole must tell all and risk alienating Ben.

Parents need to know that the premise of My Father the Hero is that 14-year-old Nicky tells people that Andre, the man she's on vacation with, is her lover when in fact he's her father. A lot of the comedy arises from people reacting indignantly to his supposed deviant behavior when it's all really innocent. A line is played for laughs about people thinking he's a child molester. Nicky invents wild stories to make herself seem more grown-up and interesting. When her lies start to cause problems, she attempts to fix them by adding more lies. She also manipulates people and situations. Aside from the questionable taste of the premise, there's little of concern in this story about a father and daughter coming to terms with each other. Nicky and Andre kiss on the cheek a few times, and Nicky tries to make some of these seem romantic to make her real love interest jealous. Otherwise there's one kiss on the lips and a few mild swear words, although "s--t" is used once.

Nicky tells people that she's with her lover, but he's in fact her father. Andre says that people think he's a child molester, and there are many instances of people reacting indignantly to him. Statutory rape laws are hinted at but referred to as "those kinds of laws." There are a few kisses on the cheek between father and daughter, some of which Nicky intends to look romantic. Nicky and Ben kiss once. Andre is seen once in only boxer shorts. Nicky's bare buttocks are seen when she's wearing a one-piece thong bathing suit. Nicky says her mother is a prostitute who ran away with her pimp, and we see the guest on a daytime talk show who claims the same thing, giving Nicky the idea.

A character is punched in the nose, but there's no blood.

A father will do anything for his daughter, no matter how crazy. When you make a mistake, ask for forgiveness.

The Concorde jet is seen once, and the Air France logo is seen in the background at the airport.

Andre is frequently seen with an alcoholic beverage, mostly at the tropical island resort, but is never depicted as drunk. Nicky, who's 14, is served a tropical drink at a resort bar, but her father takes it away before she has any. Andre asks Nicky to bring him and 17-year-old Ben a couple of beers. Nicky places two beer cans on the table, but no one is shown drinking any. One of Nicky's lies is that she used to be a drug addict, and she mentions dope and sniffing glue.