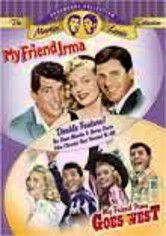 1949 NR 3h 12m DVD
In My Friend Irma, Dean Martin and Jerry Lewis star in their film debut as juice stand operators who hit big time thanks to Martin's golden vocalizing. In the sequel, Marie Wilson reprises her role as Irma, who hightails it west with the comic duo.