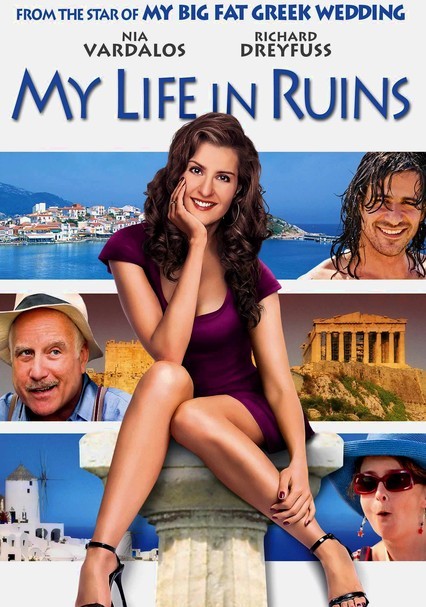 2009 PG-13 1h 38m Blu-ray / DVD
Greek American travel guide Georgia is so distracted by what's going wrong as she leads a motley crew of tourists through some of Greece's most historic sites that she almost misses out on a chance for romance with her hunky bus driver.

Parents need to know that this romcom probably isn't on most kids' radar, with the exception of teen girls who love romantic films. Sexuality includes discussions about the main character's sex life, some kissing, and a brief post-coital shot of a sheet-covered couple lying in each other's arms. There's less strong language than in most PG-13 films, with "ass" being the main offender. Violence is limited to a pool-side scuffle, and consumerism is tied to one character's job at IHOP, which is a running gag in the movie.

Several references to Georgia's inactive sex life; a few bawdy jokes about the easily available Spanish divorcees on the tour. Several characters flirt and kiss, and one couple ends up going to bed together (they're shown, torsos covered, on the floor). It's implied that another character has a menage a trois, because his hotel door opens and he's in boxers and a robe and then two women in lingerie are visible behind him.

When a tourist is told that his Greek T-shirt announces he's gay (in a crass way), he attacks the tour guide who gave it to him, pushing him into a pool and yelling at him.

Although Georgia is an intelligent, educated woman, she's depicted as passionless and uptight until she's swept off her feet by an attractive, mysterious man. The movie's message seems to be that a woman isn't happy or successful unless she's "got a man." On the other hand, the tourists all help each other in one way or another. One kleptomaniac elderly lady stops stealing by the end of the tour, and the obnoxious American couple starts to be more sensitive to Greek culture, etc.

One of the characters is an exec at IHOP (International House of Pancakes), and he mentions IHOP constantly, gives everyone his business cards, and compares people and places to menu items. It's a running joke throughout the film. Another tour guide discusses taking his group to the Hard Rock Cafe.

Adults frequently drink beer, cocktails, and Ouzo on their Greek vacation. In one scene, everyone's at a bar, and a few characters get drunk. One tourist pulls out a cigar but is told he can't smoke it.