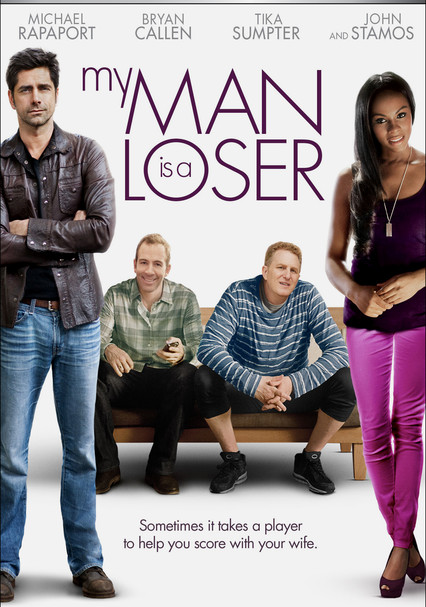 2014 R 1h 35m DVD
From emotional aloofness to general boorishness, married men Paul and Marty have begun to exhibit traits their wives are less-than happy with. As a doghouse-exit strategy, Paul and Marty enlist a bachelor pal to tutor them in wooing back their women.

Parents need to know that My Man Is a Loser focuses on the trials and tribulations of long-term relationships, portraying husbands and wives in stereotypical opposition to each other rather than partners. Two husbands commiserate with each other and with their bachelor buddy about the woeful state of their marriages, but they eventually realize that some of the issues are their own fault. Meanwhile, their wives have plenty of their own complaints in this predictable romcom that's filled with swearing ("s--t," "f--k," etc.), has several drunken scenes at bars, and features lots of graphic discussions about sex and plenty of women in their underwear -- and sometimes topless.

An extended scene at a strip club involves several topless women. A handsome bachelor has a nonstop stream of women moving through his bedroom. His partners are frequently seen in their underwear, and a few scenes show them fooling around. Married couples talk about sex often, usually angrily, and sometimes in a graphic way. Husbands complain about their sex lives to their friends; their wives do the same thing with each other.

Couples bicker incessantly. A group of men gets into a drunken brawl at a nightclub. Two men get into a yelling match at a Little League game.

The positive take-aways include the idea that being in a long-term relationship requires maintaining a connection with your partner every day, for both the little things and the big ones. Most importantly, just be there, be present, and make sure to show up and be part of the family. On the downside, husbands and wives are frequently portrayed as being in opposition to each other, rather than partners.

Several scenes take place at bars or a strip club, with people drinking heavily and often getting pretty drunk.