My Name Is Fame 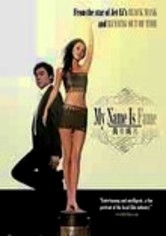 My Name Is Fame

2006 NR 1h 34m DVD
Once-popular actor Fai's (Ching Wan Lau) career is on a serious downslide as he continues to expect star treatment and alienates everyone around him. When he meets struggling actress Fei (Siyan Huo), he takes her under his wing, thus launching a friendship that winds up helping him as much as it helps her. A host of stars, including Tony Leung Ka Fai and Ekin Cheng, make cameo appearances in this humorous portrayal of the Hong Kong film industry.